Since it was a lovely sunny day yesterday we decided to go to the seaside. Our destination Walton on the Naze is a town on the Essex coast, close to the border with Suffolk.

Naturally we arrived in time for lunch and what says British seaside better than fish and chips, so we headed straight for Yates’s on Old Pier Street. In my opinion this is Walton’s best fish shop and it’s usually really busy so we were lucky to get a table for four.

This is a great traditional fish and chip restaurant with a takeaway counter at the front and a seated area at the rear. A large portion of cod, haddock or rock (that’s dogfish to the uninitiated) is £7.45 and the fish is cooked to perfection. You choose your menu, pay at the counter and the meal is brought to you when it’s ready.

I had a medium haddock and chips which was plenty at £6.95. Other traditional chip shop staples like sausage in batter, saveloy and pies are all available and the side dishes include breaded mushrooms, spring rolls, curry sauce and onion rings.

Eating over we headed for the beach at the Naze itself. This is a pretty interesting piece of coastline as material from the Pliocene (five and a half to two and a half million years ago) is being constantly weathered out of the cliffs so it’s a rich hunting ground for fossil shells and shark teeth. There is also some more recent history to be seen in the shape of Second World War coastal defences.

What I like about this part of coast is the bird life and we were really lucky on Saturday. Down by the shore line I found plenty of sanderling  playing in the surf

Some black headed gulls were also enjoying seeing what the surf had washed up. 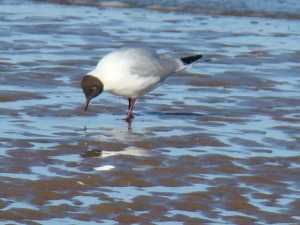 Further from the water line I found some young ring necked plovers hunting in the rock pools.

On a previous visit I was lucky enough to photograph an oyster catcher, this time I found this group of four just as we were about to leave the beach.

They are wary little birds but by sneaking up on them I managed to get a few closer shots like this.

It was a great end to a great day.

One thought on “Fish, Chips and Birds – a Grand Day Out at Walton on the Naze”