From Helsingor we decided to visit the Danmarks Akvarium (Denmark’s Aquarium) in Charlottenlund, since it was on the railway line back to Copenhagen.

The Oresund train for Malmo took us to Hellerup, where a rather enthusiastic bus driver thinking we were looking for the Experimentarium, marhsalled us on to the wrong bus. Still it did allow us to see this rather magnificent building.

This is the former Tuborg Brewery mineral water bottling plant, which was designed by Sven Risom and completed in 1923. Two buses later we found what we were looking for.

Danmarks Akvarium opened in 1939. It is home to a wide variety of fish including those from the Oresund Straits and the Baltic. 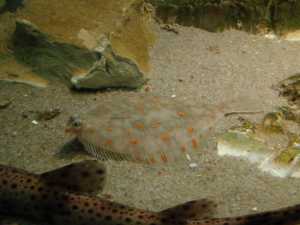 There's a plaice for us

As well as sharks, turtles and some mean looking piranha. 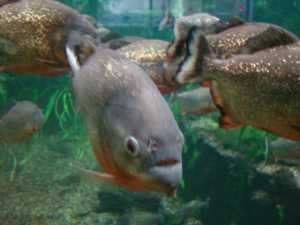 Not to mention the highly toxic but lovely lion fish

And this chap from the Amazon, I don’t know what he is but he doesn’t look very happy

Fortunately all our travel and entry to the aquarium were covered by our Copenhagen Cards. From the aquarium it was a bit of a hike to Charlottenllund Station but it was through some lovely shady woodland, and then a short railway journey back to Copenhagen.

That evening we decided to try one of the local restaurants to our hotel. La Sosta (Julius Thomsens Gade 12) is a very pleasant little pizzeria seemingly managed single handed by an eccentric Dane. Despite having a bit of a wait, my salami pizza was really good, while the fresh tomato soup, with hints of garlic and basil was just divine.  The house wine was a indifferent and at DKK195 (that’s a whopping great £23) rather expensive, but that’s about normal in a Danish restaurant. Total cost for four people; three kirs, one soup, bruschetta to share for starters then two pizza, one penne and one ravioli, wine and water DKK849 (just over £100).