Mexican food really is the flavour of this month, what with Tommi Miers’s new show Mexican Food Made Simple, the Wahaca Street Kitchen being parked up at Canary Wharf and now a new branch of Poncho No. 8 in Soho’s Old Comption Street.

Shipscooksstuff was lucky enough to get an invite to Soho Poncho’s opening bash and a very pleasant time was had by all. The restaurant was founded by former banker Frank Yeung and Nick Troen who used to work for Innocent Smoothies and this is their first branch in London’s West End. It’s also the first one to have a booze licence so it was  frozen margaritas all round!

Poncho No8 takes it’s inspiration from the Mexican street food of California. You go up to the counter, choose the fillings that you fancy,

and the staff expertly roll your customised burrito in front of your very eyes. Fillings include chicken, steak and slow cooked pibil pork. We tried the lot and they all tasted pretty good and authentic. 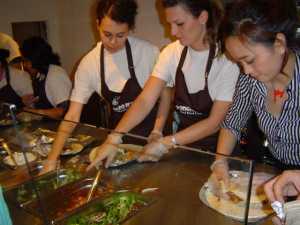 Burrito rolling at Poncho No8

Despite the street food theme Poncho’s is a very different animal to Wahaca, which has a branch just around the corner in Wardour Street. Wahaca is a dining experience on it’s own whereas Poncho provides great street food on the go (although there is some seating upstairs if you want to have a linger), nothing wrong with either beast. Like Wahaca, Poncho has a good selection of Mexican beers like Corona, Modelo and Pacifico – glug glug.

So what’s the damage? Well a walloping great burrito stuffed with meat, cheese, salad and beans will cost about £6.00 and a beer about £3.50 . But tomorrow (Thursday) the Soho branch will be dishing up free burritos between 12 and 4pm.