I bought a new camera yesterday, so I thought let’s take it into Epping Forest and take some pictures of the wildlife. Admittedly I did leave it a bit late in the day to go, so the wildlife had mostly gone to bed. Aside from a couple of mallards and a moorhen, I did catch a fleeting glimpse of a muntjac, but other than that the whole the animal kingdom seemed to be tucked up safely for the night.

Even the Ducks were hiding in Epping Forest

I did, however find some interesting fungi and make friends with a Jack Russell. 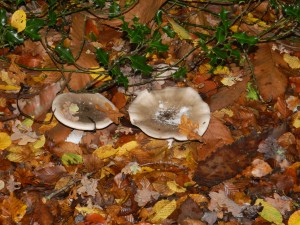 Not boring they are Fungi

And there were some quite lovelyviews in the late afternoon light.

Buying the camera was an interesting experience. I had seen the particular model I wanted in a shop a while ago and naturally did a bit of internet research to see what sort of price I could expect to pay. The first retailer I went into was part of a very big national chain on London’s Oxford Street. It wasn’t long before one of the assistants homed in on me like a dog on heat, as I had a fiddled with the camera chained to the stand.

Having watched so many editions of Antiques Roadtrip over the past couple of weeks I knew exactly what to do.

‘What’s the best you can do on this?’ I asked

‘We will match any price sir’ he replied

So I gave him the price and he says

‘Was that an online price?’

‘But that’s a bit daft, because people will just buy things on the internet and your business will fail’

It was at this point I realised that it was pointless trying to haggle with a huge corporation intent on  commiting retail suicide and tried one of the independents on Tottenham Court Road. Here a similar tactic of asking him to match the internet price paid off. Although the dealer could not come down to meet the internet price, he was willing to throw in a nice chunky memory card to clinch the deal. I was happy with the price I paid and he was happy to have made a sale, just shows haggling is not just for the Grand Bazaar in Cairo.

5 thoughts on “A Brief Walk Epping Forest – time to try out my new camera.”