Tucked away in a corner Funchal’s old town was our hotel, the Porto Santa Maria. Right on the seafront, the location could not have been better. Along the way to the shops we’d stop off to watch the plovers on the sea wall.

These little birds were remarkably confident, allowing people to get much closer to them than their British cousins do. 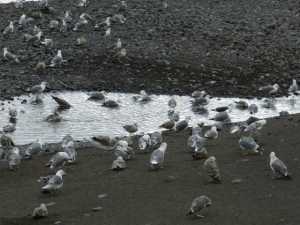 Unless they are herring gulls that is, the freshwater mountain streams that empty into the Atlantic through the black volcanic scree of the beach are just the sort of place to wash that salt out of your feathers.

Right in the centre of Funchal is this amazing huge Art Deco building,

It’s not a cinema, but the Mercado dos Lavradores (Worker’s Market). Now I thought I’d seen most kinds of fruit, but the stall holders had a bewildering array of exotic wares on display

There were pomegranates, chilis, bananas, mangoes, guavas, custard apples and several different varieties of passion fruits, but I had never seen these before.

According to the stall holder they were pineapple bananas and indeed the fruit’s flesh had the texture of banana, but a sharp flavour close to that of pineapple. Incidentally should you find yourself in the Mercado, don’t buy fruit from the stall holders upstairs, for some reason they think it is fun to rip tourists off.

The fish market operates from the back of the Mercado. 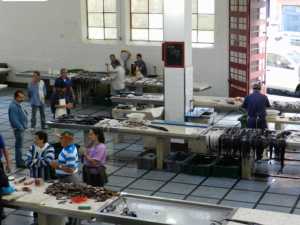 The long black fish are a local delicacy, the Black Scabbard Fish, which are often served with locally grown bananas. Handsome beasts aren’t they? 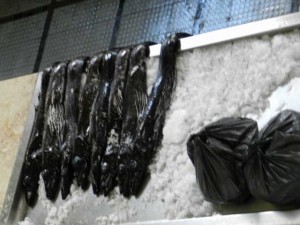 The Mercado was designed by the architect Edmundo Tavares and the build completed in 1940. More recent artworks could be found on our way back to our hotel. The 19th century houses of the Rua Santa Maria form a Bohemian enclave of workshops and restaurants. Local artists have painted many of the doors with their own designs.

Some reflecting their own concerns about surveillance in society. 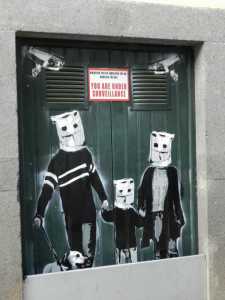 This one was right at the bottom (groan) of the street.