“Do you fancy going to Wahaca for lunch?”.

Well it doesn’t take much in the way of temptation to get me into one of Thomasina Meirs‘s Mexican street food restaurants, even if it is at London’s newest shopping (I’m male so I don’t do hanging around in shops, OK bookshops maybe and food shops) complex Westfield Stratford City, so I grabbed my scarf and coat and toddled off down to the tube station.

On the Bridge over the Railway on our way to Westfield

Somewhat confusingly this is the second Westfield Shopping Centre in London. The first to be built was in West London. This one isn’t, it’s in Stratford, East London, never to be confused with Shakespeare’s Stratford upon Avon, as that will inevitably lead to disappointment. Westfield Stratford City only opened a couple of months ago and is packed full of big name retailers like Marks and Spencers and John Lewis, as well as some perhaps more unexpected ones like Getty Images, with their huge photographic archive on sale. There’s even a West Ham United Shop, which is topical given the fuss and bother over their anticipated move into the nearby Olympic Stadium once the Games are over.

Now as I mentioned, Stratford is also the site of London’s Olympic Park and from the foot bridge over Stratford’s railway station you can get a good view of Anish Kapoor’s Orbit towering over the park. This 115 metre tall piece of public art is the tallest sculpture in the UK. (It was only after I had taken the photo that we discovered an entrance to Stratford Station in the complex so we needn’t have used the bridge to get there, but then we’d have missed the view). 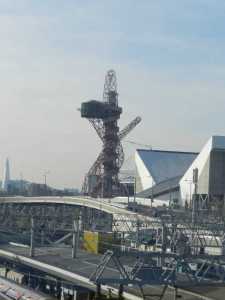 Westfield Stratford turned out to be a lot nicer than I expected. It isn’t just a huge mall constantly recycling the same air over again. Yes there are some enclosed bits, but a large part of it is open air and there are some decent restaurants, even if they are branches of chains like Wahaca, Yo Sushi or Jamie’s Italian. The meal in Westfield’s Wahaca was every bit as good as the branches in Soho and Canary Wharf and not bad value at £66 for burritos, a couple of side dishes and beer or water for the four of us. Despite the excellence of the burritos, on leaving the restaurant I felt a pang of regret, since right next door was a branch of the Brazilian meat on a skewer joint Cabana. Still I suppose that is somewhere to enjoy on our next visit.

Olympic Stadium as seen from Westfield

So hunger satisfied, I left my companions to their shopping and headed home. On leaving the tube station I discovered that our local fire fighters had opened a grotto in the Fire Station to raise a few bob for charity and entertain the local kids.

What a fantastic group of people they are, not just extraordinarily brave and resourceful, but thoughtful with it.