And so onwards to E

E – Event you Experienced that made you say wow.

Wow!- there have been rather a lot of these over the years, here’s my selection 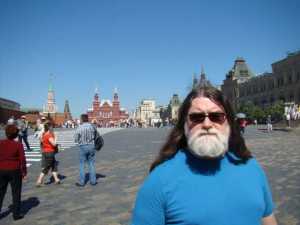 Me in Red Square: Kremlin on the left and GUM Department store on the right

Moscow’s Red Square and discovering just how big it really is. Like many of the children of the 60s I remember seeing the May Day parades from Moscow in grainy black and white on the TV. Seemingly endless columns of tanks, missile launchers and goosestepping soldiers would march pass the scowling Politbureau, as they took the salute from the top of Lenin’s tomb.

Lenin's Tomb in front of the Kremlin

Even so it was only when we passed through the Voskresensky Gate in 2010, that I fully appreciated how enormous Red Square was, bordered on one side by the Kremlin and the other by the GUM department store, which today is more like a luxury shopping mall.

GUM all lit up and pretty

At the far end 300 metres away was the beautiful onion domed Cathedral of St Basil, where the chapels under the domes are being restored to their former glory.

Of course one of the reasons for the square being so huge was fundamentally and horribly practical, it gave the occupants of the Kremlin a clear field of fire to massacre anyone attempting to storm the citadel!

The Pyramids of Chichen Itza in Mexico.

It’s hard to imagine that these huge buildings dating back to the ancient Mayan and Toltec civilisations were mortared with the same stuff used to make chewing gum! The site itself is huge and surrounded by jungle, real Indiana Jones stuff.

Dachshund Parade Krakow: this happens on the first Sunday in September in the Polish city.

A Knight in Shining Armour

I have no idea why it happens, but it has now been going for about 20 years and some of the costumes are very creative. 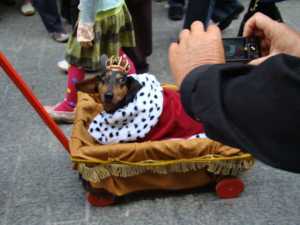 We discovered this event purely by luck. It was featured in the easyJet inflight magazine I was reading as we were on our way there.

And just to prove we have the wow factor here in the UK, Stonehenge in Wiltshire.

I do actually think the stone circle at nearby Avebury is more impressive as a piece of neolithic architecture, it’s far bigger for a start and there is a good pub that does decent food too, but it’s not as complete or as photogenic as Stonehenge.

Other wows would have to include: watching the Sun rise and set over Uluru in Australia, the Great Barrier Reef, Philip Island’s (near Melbourne) Fairy Penguin Parade as the Sun goes down, the rock-hewn city of Petra in Jordan, the Dome of the Rock in Jerusalem, taking a helicopter ride through the Grand Canyon and then another through the man-made canyons of New York city, the Pyramids of Egypt and those of Teotihuacan near Mexico City, The Valley of the Kings and the Temples of Karnak and Aswan, Abu Simbel, the Parthenon in Athens, the mosques of Istanbul and the megalithic passage tomb of Newgrange in Ireland. However they are all on film rather than digital.

It would have to be by train. It’s so much more civilised than flying, you usually travel city centre to city centre without expensive and inconvenient trips to out of town airport locations, you are not subject to so many queues, petty bureaucrats and silly regulations or rip off airport prices. Scenery can be enjoyed as it passes by and you can get up and take a walk.

My favourite rail journeys have been St Petersburg to Moscow, London to Edinburgh (obviously enough) and the Oresund crossing from Copenhagen in Denmark to Malmo in Sweden over the Baltic Sea. Speaking of railway bridges between Edinburgh and Dundee there are two Victorian stunners: the amazing cantelever construction that is the Forth Bridge and the two and a quarter mile long Tay Bridge. Worth the trip alone even if you don’t like Marmalade.