One of the great pleasures of a British seaside town is good fish and chips, however on our recent trip to Southend I was beginning to despair. The walk from Southend’s Victoria Station had revealed a shopping precinct dominated by fast food outlets including no less than three branches of Greggs.

Undaunted we asked the nice lady at the pier station if there was anywhere she would recommend for a decent feed and she sent us off up the Western Esplanade to, 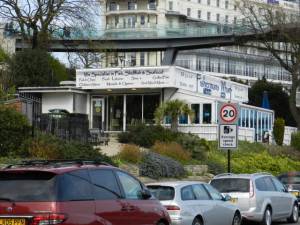 Fisherman’s Wharf. I have to say that the area on this side of the pier is much nicer than the parade of amusement arcades, whelk stalls and grim-looking boozers we had encountered on our way to the Kursaal earlier.

After climbing the steps to the restaurant we discovered a very clean white, if a bit cramped minimalist interior. It was certainly quite popular even at four pm (we’d skipped lunch making do with a pasty from the aforementioned Greggs on the way). Settling in a bottle of Verdejo was ordered and we set about perusing the menu.

I kicked off with the potted brown shrimp. Quite a generous portion and very tasty even if it could have done with the butter seal being left intact. Old Nick had the whitebait and Mab the bouillabaisse. 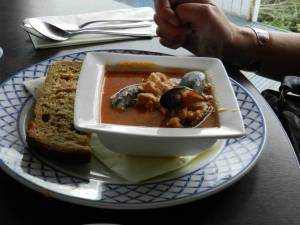 Both beautifully presented and flavoursome. Despite the wide choice of fish available all three of us went traditional and ordered haddock and chips as our main course.

The fish was lovely and the home-made tartare sauce quite exquisite. My only criticism (and minor at that) would be that the chips although plentiful were a bit dry for my taste. Well that and the misleading description of the Verdejo as a dry wine! The creme brulee desert was a dish of creamy loveliness.

What’s the damage? For three people, starters, mains, one desert, coffee and wine £77.