On Sunday, as London Underground were persisting with the, ahem ‘improvement works’ that had denied us access to London’s West End, we took the Jubilee Line down to London Bridge in the hope of finding our favourite Spanish grocer Brindisa open and getting some padron peppers and one of their amazing chorizo sandwiches for lunch. Bit of a cock-up as Borough Market was closed, so no Brindisa.

However on our way from the tube station we had passed Cafe Brood’s outdoor kitchen, 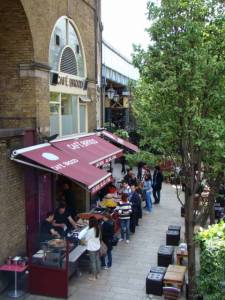 the aroma from the barbecued chicken and Merguez Sausages and the huge pan of Paella drew us back like iron filings to a magnet.

The spicy Merguez Sausages more than made up for the chorizo sandwich and with three served up on salad, they made for a substantial meal. Mab’s Paella rice came with a rich tomato based stew that had a serious helping of chorizo and seafood in it. It was perfect for spreading on the accompanying ciabatta, that had been flame grilled over the barbecue, as we sat overlooking the grounds of Southwark Cathedral.

With a glass of red wine for me and a fizzy water and a coffee for Mab the bill only came to £20, a dead good alfresco Sunday lunch.