So what would be my unforgettable memory from 50 odd years of travelling?

Well having watched Indiana Jones and the Last Crusade again last night I decided that visiting the Treasury at Petra, where the exteriors for the film’s finale are played out, would probably top my list. It was also featured in the video for the Sisters of Mercy‘s Dominion single back in 1987, which aside from being by one of my favourite bands also quite neatly illustrates the quarter-mile gorge or Siq that leads you to your first glimpse of the Treasury building or Al Khazneh as it is properly known.

We visited Jordan back in 1993 and ancient Nabateaan city of Petra was at the top of our ‘to see’ list. The Nabateaans established the city around 312BC, only for it to decline under the Romans and eventually be abandoned. It was lost to most of the world until 1812 when the Swiss explorer Johann Ludwig Burckhardt coined the phrase “a rose-red city half as old as time”. Of course the local Bedouin tribes knew it was there all the time and used the ruins for shelter.

Al Khazneh is thought to have been built about 100 BC. Nothing quite compares to emerging from the Siq to behold the whole imposing structure that is carved out of the living sandstone cliff face. Local legend had it that bandits stored their loot in the urn at the top, hence the name Treasury and it’s also the reason why the urn has been pockmarked by Bedouin bullets in futile attempts to spill the treasure.

V is for Visas

Over the years I have collected visas for the USA, Egypt, Turkey, Australia, Jordan and most recently Russia. Athough they may look pretty in your passport, visas are a bit of a palaver to get and in reality only an officially sanctioned state robbery. The Russians in particular wanted to a whole lot of information ranging from occupation, military service and education to every country we had visited over the past ten years and then for filling in the form ourselves charged us £30! 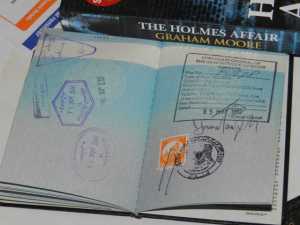 W is for Wine

Help there’s been so much I can’t remember! I do enjoy a nice glass of wine, but I don’t really know enough about it to claim to be an expert. to be fair I’m as happy sinking Spanish rose from a tetra pack that cost under a Euro as knocking back fine Champagne.

I think my favourite wine experiences are associated with specific events: like drinking chilled Frascati with a bowl of salted nuts in Frascati; sipping that over-oaked fizz the Aussies make as the Sun set over Uluru or a nice chilled Cava watching the Sun set from above the clouds on Mount Teide on Tenerife.

Chilled Cava above the clouds

2 thoughts on “Travel A to Z – Unforgettable to Wine”