It won’t come as any surprise to learn that Brick Lane was once a centre of brick manufacture in London’s east-end, thanks to the local deposits of brick clay. During the 17th century Huguenot weavers seeking refuge from Catholic persecution in France settled in the area. Then successive waves of Irish, Jewish and later Bengali immigrants followed the Huguenots, attracted by cheap rents and unskilled jobs in the ‘rag trade’. Today the area around Brick Lane is known as Banglatown and famed for its street market and many curry houses.

With the benefit of hindsight I think we may have planned our visit the wrong way around when we arrived at Aldgate East Tube Station (District and Hammersmith and City Line). 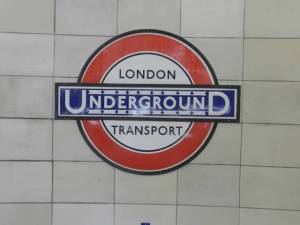 Taking a left up the Whitechapel High Street we passed the Whitechapel Art Gallery (handy hint its free to get in with nice clean free to pee loos) and these jolly Vampire carrots,

before making another left into Osborn Street. On 4 April 1888 the prostitute Emma Elizabeth Smith was killed in Osborn Street. Some people believe that she was the first victim of Jack the Ripper, although there is no hard evidence to link her death with the Ripper murders. Osborn Street leads into Brick Lane itself and you are soon surrounded by the tempting smells of fragrant spices and Bengali sweets wafting from the many Asian shops and restaurants. It was all too much, and after stocking up on bargain bags of spices (so much cheaper than our local supermarket), a bag of freshly cooked samosas from Madhubon (42 Brick Lane) were being devoured. 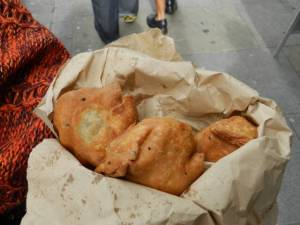 Almost every restaurant we passed seemed to be the proud owner of a ‘Best Curry in London’ award. Menus were perused, but it was a bit early in the day and the delightfully spiced and quite substantial samosas had taken the edge off our hunger.

Joseph Truman started brewing ale in Brick Lane in 1663, of course at the time beer was safer to drink than water. Truman’s Black Eagle Brewery was swallowed up by the brewing giant Grand Metropolitan in 1971 and ceased brewing in 1988 as the brewing giant attempted to force beer lovers to drink nasty keg beers like Watney’s (AKA Grotney’s) Red Barel. Recently the old brewery has undergone a bit of a renaissance,  as the buildings have been redeveloped into indoor market spaces to rival those of trendy Camden Lock.

Just some of the food on offer at the Old Brewery

Certainly the selection of food stalls offered an even wider choice than Camden, with Bengali, Chinese, Caribbean, Cuban, Ethiopian, Japanese, Mexican, Moroccan, Spanish, Thai,Tibetan, Turkish fast food joints all doing brisk trade. Thankfully I was still full of samosa so avoided having to make a choice. Aside from the food there were stalls selling new and vintage clothing, jewelry, antiques, prints and other craft items to the shabby-chic students, Guardianistas, tourists and sharp dressed young media darlings that make Brick Lane such a trendy place to hang out today.

Passing on through the bustling street market we came to Brick Lane’s legendary bagel bakeries, Although most of Brick Lane’s Jewish immigrants have moved on, Biegal Bake (59 Brick Lane) is still going strong. Open 24 hours a day, it’s London’s oldest bagel bakery and produces over 7000 bagels every day. Biegal Bake is famed for its hot salt beef bagels, they must be pretty good since people were queuing two deep inside the shop and out on to the pavement. We looked at the queue and decided that no matter how good they may be life was too short for standing in line.

By the time we’d reached the Shoreditch end of the market, we were starting to get hungry, however we were now at the wrong end of Brick Lane for the curry houses and my ankle was starting to hurt. Fortunately we were close to a part of London colonised by some later immigrants, the Vietnamese Boat People and it was a short walk, 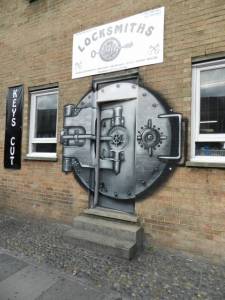 to Kingsland Road (AKA Pho Mile). I’d eaten in the Viet Hoa Cafe (70-72 Kingsland Road) before, so I was keen to share the experience with my fiends. They weren’t disappointed. I tried the chicken with pickled vegetables . The chicken was delightfully spicy while the crunchy pickles had just about the right amount of sourness. I also polished off Mab’s tasty Singapore noodles. With beer, tea and egg fried rice the damage only came to £57 for the three of us. A perfect end to a pleasant day out.

I think the next time we visit Brick Lane we might try navigating from the overground station at Shoreditch High Street and walk down Brick Lane to the tube at Aldgate East. Hopefully if we get there early we can have a salt beef bagel and a curry.