What does the old rhyme say, oh yes ‘two for joy’ 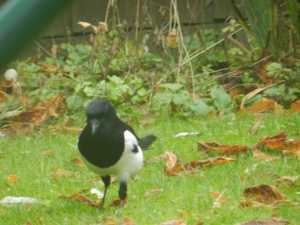 Magpies are fairly common around here, but it had been a while since I last saw one, let alone two in the garden. I think they are pretty handsome birds, but like the other corvids they are a bit destructive, robbing nests and eating baby birds.

Having said that they are common, there do no seem to be as many about now as there were a few years ago when there was a bit of a magpie population explosion, but I have noticed there are increasing numbers of jackdaws about.

In other garden news, since the weather has just got a lot colder in the UK I have filled the bird feeder and put out some fat balls to help the birds through the winter. Byron our green woodpecker is still visiting to hoover up the ants and the wood pigeons are still finding plenty to eat in the lawn.

The pictures were taken through the kitchen window with a Nikon P-500.