Looking like something from the age of the dinosaurs, the black iguana was by far the commonest land creature we encountered in Mexico. 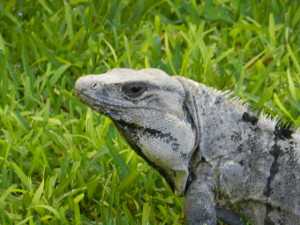 In fact I’m sure I have seen Raquel Welch being menaced by one back in the days when she had a boyfriend called Toomak and a lovely fur bikini.

The ones hanging around the gardens of the Grand Palladium resort were a lot smaller at about one and a half metres for a big male,

and mostly just interested in sunbathing.  They tend to live in family groups of up to five lizards, presided over by a large male. They vary in colour from a dull brown through to blue under the black markings that give them their name. As far as food goes they are omnivores, eating bits of plant, insects and other lizards!

Aside from a crocodile, mountain lion or a jaguar they probably haven’t got much in the way of natural predators and they certainly weren’t that bothered by us, although I do understand that they are often on the menu in poorer Mexican households.