It’s the London Underground’s 150th birthday today, but one of the oldest bits of tunnel used by Transport for London’s network is even older than that, as you can see from this plaque at Rotherhithe Station. 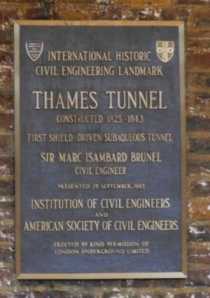 The Thames Tunnel was the very first tunnel to be sunk under a major river anywhere in the world and it was also one of the first major engineering projects undertaken by the legendary Isambard Kingdom Brunel, though as an assistant to his often overlooked father, Sir Marc Isambard Brunel. (If you want to find out more about Brunel Jnr see the BBC biography here)

The tunnel had never been intended for trains. Back in the early 19th century this part of the Thames was a very busy shipping lane with ships bringing produce from all over the world to the Port of London. A conventional bridge at Rotherhithe would have needed to allow a clearance of 100 foot for a tall ships mast, so a tunnel was seen as the only practical solution to getting goods from one side of the river to the other. Emigre French engineer Sir Marc Brunel proposed using his revolutionary new invention, the tunnelling shield to bore the tunnel beneath the river bed to the north bank at Wapping.

Pumping the water out from the tunnel was the job of a steam engine which was housed in this engine house which is now the Brunel Museum in Railway Avenue, Rotherhithe. 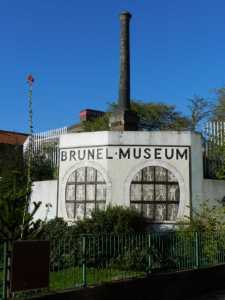 Inside the museum you can discover how the miners drove the tunnelling shield under the Thames, excavating two inches of soil at a time to be followed by an army of bricklayers who shored the structure up. Conditions were pretty horrible for the miners. In the days before Joseph Bazelgette rebuilt London’s sewers, the water seeping into the tunnel works was little more than raw sewage and the air soon became so feted that men would pass out and need to be taken back outside to recover in the fresh air. Methane gas explosions ignited by the miner’s naked candle flames and flooding were a constant danger. The Young Isambard almost drowned on one such occasion, but eventually in 1843 the tunnel was opened to the public.

Despite its initial success as a tourist attraction it never really took off as a river crossing because the money ran out before access slipways for horse-drawn wagons could be built. Bizarrely it did support an early form of shopping mall even if some of the trading carried out would have required a red lamp!. The tunnel was eventually acquired by the East London Railway company in 1865 and became part of London Transport’s old East London tube line before taking up its latest incarnation as part of the London Overground network.

It didn’t take us long to look around the museum, so while we were waiting for the guide who was going to take us down the Thames Tunnel’s original access shaft we had a coffee from the very pleasant Turkish cafe on the museum forecourt. I was rather taken by these benches with a  little Victorian train running through them. 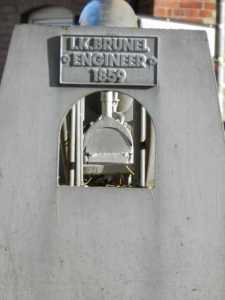 There’s even a little Brunel in his stovepipe hat driving it, although I don’t think Brunel ever designed railway locomotives.

We’d paid a little bit extra on top of the £3 admission fee to tag along on the final part of a guided tour that took us down the original tunnel access shaft that Marc Brunel had ingeniously sunk into the soft waterlogged ground using its own weight as more bricks were piled on the top. It was a bit of an adventure getting in. 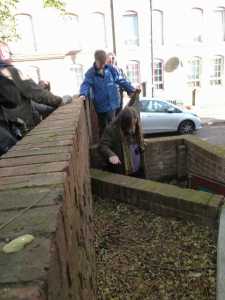 I descend into the depths

A short set of steps led to a tiny door that I had to crawl through on my hands and knees to reveal the smoke blackened walls of the shaft. 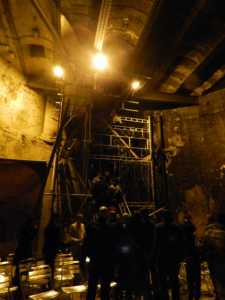 The original access steps had been removed when the railway arrived and the shaft became a huge chimney for the smoke from the locomotives. We had to descend through the scaffolding to reach the floor. OK I know visiting a bloody great hole in the ground may not be at the top of everyone’s list of things to do in London, but this is one almighty important hole where you will feel touched by the history of this great city and the people who shaped it.

8 thoughts on “The Brunel Museum – London”