I have often remarked about how much there is to see above street level, if only people took the trouble to look above street level there is a wealth of interesting material to be discovered.  After lunch at the rather splendid Dome on our recent Edinburgh adventure (see here) I discovered these wonderful relief sculptures along the pediment of the Standard Life Building just over the road in George Street. 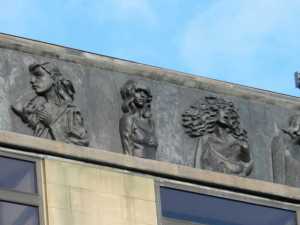 The friezes, known as the Glass Virgins, were commissioned from the sculptor Gerald Laing for the pediment of Standard Life’s headquarters when the Victorian building was given an otherwise bland corporate face lift in 1975, Laing’s sculptures were added to the pediment in 1977.

the rest of the unwise virgins

I imagine Standard Life must have drawn a comparison between the Parable of the Wise and Foolish Virgins, where the smatypants virgins are bright enough to bring along extra lamp oil to light the wedding procession, and taking out one of their life assurance policies.

Personally I think the Wise  Virgins are rather lovely, looking almost like a piece of 1930s Art Deco, having said that it’s troubling that the wise should all look the same, but that’s a corporate stance for you.