Some of Lisbon’s most popular and iconic tourist attractions are in its western suburb of Belem. 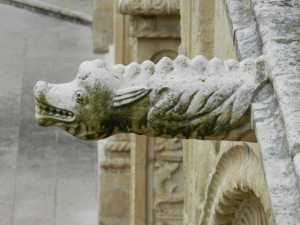 So day two of our Lisbon adventure took us down to Cais do Sodre station where we boarded the train to Belem (and yes it was included on our Lisbon Card Huzzah!). Now before we left the UK we had been given lots of recommendations about the most important thing to do there and it had nothing to do with the region’s history.

No it was cakes. Pasteis de Belem (Rua de Belem) looks like a small pastry shop from the outside, but inside it opens out into a vast cavern of blue tiled dining rooms where locals jostle with tourists for tables. Even at 10am it was packed, but we managed to get a table and were soon tucking in to spicy samosas (a legacy of Portugal’s Indian colony at Goa I imagine) and exquisitely gooey custard tarts with excellent coffee (have to say we never had a bad cup of coffee in Lisbon) and a half bottle of wine. Considering there were four of us the bill came to a crazy €16, how brilliant is that? 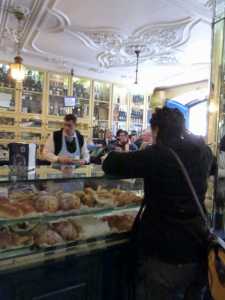 Suitably fortified we went to explore the Jardim Botanico Tropical. These splendidly decayed botanical gardens were not included on our Lisbon Cards so we had to fork out €2 to get in and explore the themed areas based upon Portugal’s colonial past. Despite the run down appearance of many of the buildings, a peak through the broken window panes of the central greenhouse revealed that research is still being carried out inside. If Dracula had ever wanted to take up horticulture he’d have been right at home here.

By the time we had finished in the Jardim it was starting to get a bit overcast so we made a dash for the Mosteiro dos Jeronmos. Construction of the monastery and church began in 1501 funded by King Manuel I’s taxes on goods from Africa and Asia and the opulence of its late Gothic (AKA Manueline) architecture is testimony of to the wealth derived from the new sea routes opened up to the east by Portuguese explorers like Vasco de Gama, who is buried in the church here.

There is no charge for visiting the church itself, but to get the best view of the interior you have to see it from the balcony that is only accessible from the monastery itself. (admission €7 or free with the Lisbon Card)

Within the monastery cloisters there is a wealth of carvings of strange beasts and monsters.

Whether these creatures were derived from reports of the far off lands opened up by the Portuguese merchants or drawn from the inner recesses of the Medieval mind are open to question, but the imaginations of the masons involved must have been quite scary places.

I was particularly taken by the gargoyles, there were all kinds of creatures, including dragons, wild boar, sheep, monkeys and even a grasshopper.

Opposite the monastery, on the bank of the River Tagus is a more modern monument to Portugal’s seafaring explorers, the Padrao dos Descobrimentos

The Padrao dos Descobrimentos was built in 1960 to mark the 500th anniversary of the death of Prince Henry the Navigator, who bravely stayed in Lisbon while people like Bartolomea Dias did the dangerous sailing over the edge of the world thing. The monument is in the shape of a ship with Henry at the prow.

It’s a fair walk along the windy banks of the Tagus to the Tower of Belem (Admission €5 or free with the Lisbon Card). 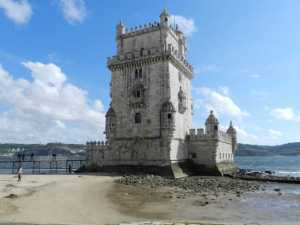 This Gothic pile was also built on the orders of Manuel I to protect the river mouth from invaders. The architect was Francisco de Arruda and the tower was completed in 1519. I think the batteries last fired in anger at the French fleet supporting the claim of Maria II to the throne of Portugal during the Liberal Wars of 1828 to 1834. We had a poke around the batteries, dungeons and climbed the tower before heading back towards the station.

On the way we stopped to admire this replica of the Fairey seaplane the Santa Cruz that made the first aerial crossing of the South Atlantic in 1922,

and to have coffee, beer and more cakes at Pasteis de Belem, before catching the no 15 tram back into Lisbon.