There’s nothing Shipscook’s Stuff likes better than a food adventure and Saturday night saw us venture into London’s south-east in search of a little piece of Peru. Peruvian food was supposed to be the new big thing last year and although it didn’t quite catch on in the way that Mexican has, London now has a number of Peruvian restaurants. Most of the ones in town are pretty expensive, but when we got a recommendation from a Peruvian pal about a little place in Elephant and Castle with the best roast chicken in town we just had to investigate.

Finding the place was the first part of the adventure, since living north of the river Elephant and Castle is somewhere we’d rarely ventured to before. (The name is derived from an old coaching inn mentioned in Shakespeare. It had a sign with an elephant and howdah, which was the emblem of the cutlers who used elephant ivory for the handles of knives and spoons. So sadly it isn’t a corruption of The Infanta de Castile the name reputably given to a another boozer founded by a returning Peninsula War veteran by local residents). However once we’d orientated ourselves at the roundabout we soon found Amelia Street just off the Walworth Road.

Emanuel is situated in the basement of a budget hotel. Once inside we shown to our table by a very pretty waitress and using our rubbish fractured Spanish explained that we had phoned through earlier in the week to book a roast chicken dinner for four, although only three of us could make it (If you want the chicken it’s essential to give them notice). She then explained that no we would not need any starters (although from the menu they did look intriguing) presented us with a bottle of alarming coloured Inca Kola which was included in the £25.99 price.

It looked even more radioactive in the glass. 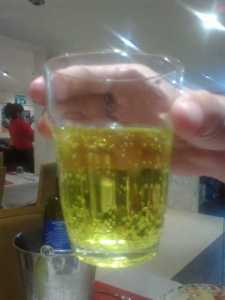 but it tasted great. I haven’t a clue what its supposed to be flavoured with, but the taste reminded me of the pineapple cube sweets I used to buy on the way home from school back in the 1960s and Juicy Fruit chewing gum. Anyhing that tastes this good is probably very bad for you!

Complete with a huge salad, three sauces and a mountain of chips the chicken finally arrived. 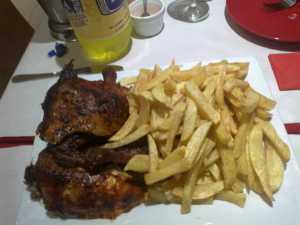 Best chicken and chips ever

The four chicken quarters were perfectly cooked with the naturally secret blend of herbs and spices imparting a really wonderful flavour, the blend certainly included chili. As if there wasn’t enough chili in the spice rub the chili sauce was almost thermonuclear and as for the chips, they were delicious especially the ones at the bottom of the plate that had steeped in the chicken juices.

To be honest the meal would easily have done four people (as it is indeed intended for), but the three of us ate every scrap, it was fabulous.

So what’s the damage? Complete with a bottle of Spanish white, a whopping bargain £40.45!

Emanuel is at 18 Amelia Street, London SE17, nearest tube Elephant and Castle or catch the 35 from Liverpool Street or London Bridge mainline. To book a chicken dinner call 020 3556 0670. Cash only no credit cards!