The small hours of Good Friday morning found us bleary eyed at London’s Stansted Airport waiting to check in to our Thomson Airways flight to Tenerife. Baggage dumped we headed for security, which despite the early hour was really busy. I suspect this was because the security goons have recently been given some of those total body scanners to harass every fourth traveller passing through, in their efforts to prevent any liquid being taken into that huge shop full of big bottles of inflammable liquid beyond.

As flights go our outward journey was very pleasant. It made a big difference having an early flight this time, most of our previous trips had arrived around 11pm, effectively losing us a day and delivering us into the resort far too late to get a decent evening meal. This time we arrived at the Aparthotel Columbus at around 1pm, ready to slip into some shorts and hit the beach bar for lunch. Or rather we would have had our room had been ready. No, despite knowing when we would turn up, we were told that we’d have to wait an hour for it to be done, so we took the baggage to the bar for some beer and chips (well we had the chips and beer not the baggage ,that was heavy enough already). Worse than that we could not have a safe deposit box key until 3pm, when the cashier was supposed to turn up, not a good idea on an island that certainly used to have a big problem with both hotel room burglaries and street crime.

We’d stayed at the Columbus a couple of times before, but despite an ‘all guilt and flash’ (as Keith Moon said in Bellboy) tart up of the reception area, the apartments themselves were starting to look a bit shabby. Mab and I nabbed the bedroom which had just about enough room to circumnavigate the bed, while Nick and the Powder Monkey were in the living area/kitchenette. I wasn’t very happy with the cooker, where the worn away numbers on the dials had been replaced by daubs of magic marker or the broken soap dispenser in the bathroom. When I reported the broken dispenser, the hotel’s genius technician turned the broken part to the wall by way of a repair, unsurprisingly it still didn’t work so I gave up and just unscrewed the nozzle, who says we Brits can’t innovate!

On the plus side it was cheap, so once we were settled in we set off to explore our surroundings.

From the Columbus it’s a short walk down to the beach, not much had changed in the four years since our last visit, although I did notice that there do seem to be a lot more feral parrots around the town.

Being a bit of a bird nerd, I’d love to know what species these birds are, they are obviously not the ring-necked parakeets that are so common back in London (and Amsterdam and New York etc.), so if anyone has any idea comments are most welcome below.

After a couple of beers at the beachside kiosk it was time to head back to get ready for our first evening out. Not wishing to waste any time while our travelling companions had the first showers Mab and I went in search of the travel agency where we’d booked trips on previous visits. It had gone, but in a little street called Caribe down by the seafront we found the Ticketbox where the helpful Rab sold us trips to Loro Parque and Siam Park and a day out whale watching on a catamaran. We’d already checked the package tour operator prices and Rab’s deals with fully licensed and insured tour companies saved us quite a considerable amount of cash proving that it’s always a good idea to shop around. 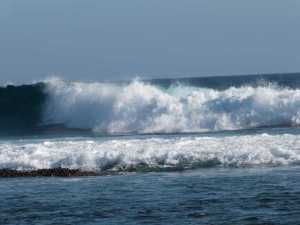 Rab also recommended the restaurant next door to the Ticket Box The Country Grill Karibe. Now this had been an Italian place with decent enough pasta and pizza last time we visited the island, but the menu has now been expanded under the new management to include meat and fish dishes and even goulash for eastern European guests, so we thought we’d give it a go after taking a bracing walk west along the seafront towards Veronicas to watch the surfers crash out.

Mixed Grill so big it was more like a mixed gorilla!

Rab’s recommendation was pretty much spot on. I’m not ashamed to admit that I like a good hamburger and the Karina’s did not disappoint leaving me well stuffed, although I could not resist a scrap of the Powder Monkey’s bacon pizza after she said it was the best pizza she’d ever had. She wasn’t wrong either, it was delicious. Her dad’s mixed grill was huge with chicken, pork, steak, sausage and a mountain of chips soaked in tasty meat juices, while Mab had to admit defeat with her pepper steak, it was just too big!

We liked the place so much that we ate there once more during our stay average price for four with a couple of beers wine water and soft drinks was about €63.

3 thoughts on “Tenerife 2013 – The Return to Los Christianos”