Maybe not quite as memorable a title as Fear and Loathing in Las Vegas, but you have got to do at least two of them. One of the problems with any place that does the mass tourism thing is finding a place to eat that isn’t trying to cater to absolutely everybody and the resort area of Los Christianos is full of places knocking out burgers, steak, pizza and pasta, plus Indian, Chinese and Mexican themed joints, but very little in the way of authentic Spanish cuisine

Now I’m not knocking burgers and pizza etc, because when they are good they really hit the spot as was the case at the Country Bar Caribe on our first night. One place we had tried before was the Restaurante Tapas and Wine  in the Avda Santiago Puig. The quality of the food was really good, particularly the sizzling hot plate of spicy chorizo sausages (€7.50), but I thought the portion sizes of the tortilla (€3.25), bacalao (salt cod balls €4.75) and the pimento de padron (€4.75) were a bit stingy for the price we paid. With wine and water our bill came to €75.44 for four people.

Further down the Avda Santiago Puig was Linares IV. Again we had eaten in here before and found it to be quite good. Linares does a good paella at €19.05 for two persons, but they now have an entertainer and we found ourselves squeezed into a table beside his electric organ. Resident entertainers of variable talent knocking out rock ‘n’ roll classics, C & W murder ballads and Irish drinking songs are now endemic in most restaurants and bars on the island and the fellow in Linares put me in mind of the Vic Reeves pub singer as he proceeded to murder Route 66 and I Can’t Help Falling in Love Again. 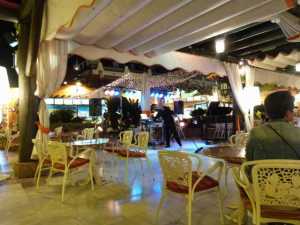 And not just in the restaurants, when we stopped off at the Cafeteria Plaza in the main drag of Los Christianos for a nightcap we were confronted with a nightly tribute act that included Mickey Bubble, Tom Jones and Vegas Elvis complete with red jumpsuit, shades and Mancunian accent! However their Lubumba (hot chocolate with lots of rum) is very good, which of course it should be for €8.

Some respite from the pub singer could be had in the Cactus Garden behind the Cafeteria. If you have ever wondered what would happen if Antonio Gaudi had been asked to design a crazy golf course you will find the answer here with the mosaic bordered cactus beds separating the windmills and rockeries. It has a bar too.

The Safari Centre is the place to go to catch the free nightly fountain and light shows, nestled amongst the expensive designer shops and international restaurants. Avoid at all costs watching it from Harry’s Bar, which of course is no relation to Hemingway’s Parisian hangout. It is the place to go if you fancy an expensive watery cocktail served by a miserable waitress while listening to a pretty dire sax player though.

Sadly the Mojo Picon family restaurant that we enjoyed so much back in 2009 seems to have gone, but we did find this fantastic little place El Paladar (C/ Noella Alfonso Cabrera) just around the corner from the Columbus.

It was not really on any of the main tourist drags and it didn’t look much from the outside, but we did notice the area under the green awning was always full of middle aged Spanish men watching football, smoking, arguing, drinking beer and generally having a good time. Well that looks like the sort of place that will do decent tapas I thought . I wasn’t wrong either. 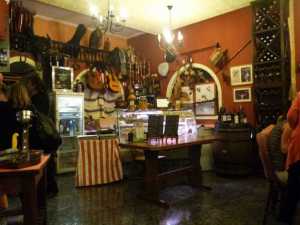 We liked this place so much that we ate here three times during the week. Stand out items were the fresh tuna steak, the sizzling prawns, the Russian salad, the Canarian baked potatoes and the battered squid rings which were seasoned to perfection. There is no entertainer and the proprietor also insists on that old-fashioned nicety the complementary digestif. For a meal with wine, beer and water we paid between €55 and €80 depending upon how greedy the four of us were. It was also one of the cheapest places to get a pint of beer in resort at €2.20, no wonder so many old Spaniards hung out there.