No matter what way you look at them dinosaurs are pretty cool. Let’s face it what isn’t to like about things that are big and dangerous, but have been dead for so long that they could never have eaten you or any of your family! 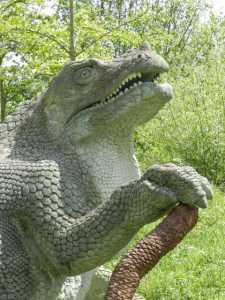 What I find even more fascinating is how science has tried to make sense of these creatures since their discovery only 200 or so years ago. It was relatively easy to reconstruct the marine reptiles that Mary Anning first excavated in Lyme Regis.

The sediments of the early ocean had preserved complete skeletons of the creatures and in some deposits in Germany even the outline of the animals’s bodies, but it was more problematic with the fragmentary remains of the first terrestrial dinosaurs that were found in the UK. All the early palaeontologists had to go on were the skeletal plans of existing reptiles like crocodiles and monitors, so the early reconstructions were of creatures that scuttled through the undergrowth on splayed legs, dragging their bellies along the ground.

Got any fish? ichthyosaur Crystal Palace

By the mid 19th century Richard Owen (the man who invented the name dinosaur) had worked out from the thighbones of creatures like Iguanodon and Megalosaurus, that they actually stood upright on straight legs like an elephant or a rhino. These new-found ideas about what these creatures looked like really fired the public’s imagination. So much so that when the Crystal Palace Company decided to relocate the 1851 Great Exhibition buildings from Kensington to Sydenham Hill, they hired the sculptor Benjamin Waterhouse Hawkins to populate one of the ornamental lakes with replicas of these prehistoric creatures. 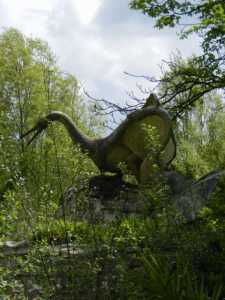 Waterhouse worked with Richard Owen to ensure that when his models were finally unveiled in 1854 they were as accurate as possible, although compared to the more graceful creatures that we know these animals to have been now, some of Owen’s reconstructions still look like lumbering beasts. 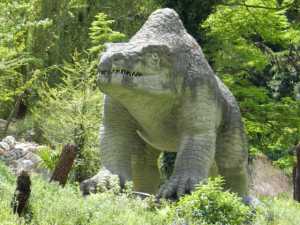 And as for the horn on Iguanadon’s nose we now know it’s really a spiky thumb, 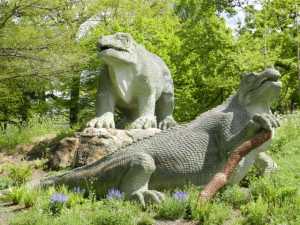 that might have been used to poke hie enemies in the eye.

In Jurassic Park Dr Alan Grant was rather alarmed when he discovered some of these, 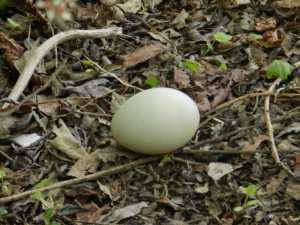 but I think that particular egg may have belonged to one of these present day descendents of the dinosaurs.

Crystal Palace is easy to reach from central London with frequent London Overground services and mainline trains from London Bridge. 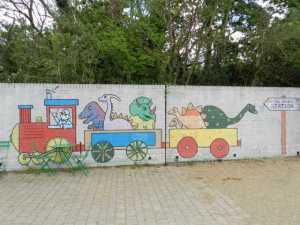 All aboard graphic at Crystal Palace Railway Station

Just take a right into the park on exiting the station and follow the path past the athletics stadium to reach the lake.