It’s been a busy old week for the residents of Amsterdam, what with a round of royal musical chairs, the Dutch remembrance weekend and Ajax playing at home. To cap that we turned up.

When we arrived there on Saturday afternoon there was so much orange bunting around that you could even have concealed someone in an easyJet uniform. We’d booked into the Ibis at Waterlooplein this time rather than take a risk at a booking site as we did last time. You know what you are getting with an Ibis and as soon as I managed to get myself up from the floor (why can’t they put the in room safe at eye level?) we were ready to sink a Head Knock (lager with an Old Jenever chaser) at our favourite Amsterdam pub de Sluyswacht (Jorddennbreestraat 1) 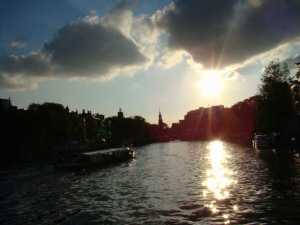 Sunset from the Rear Terrace of De Sluyswacht

Like the British as an imperial power the Dutch developed a taste for the cuisines of their overseas colonies and we’d taken the precaution of booking a table at our favourite rice table restaurant Tujah Maret (Utrechtsestraat 73) in advance to give the Powder Monkey her first taste Indonesian food.

I’m glad that we did book, there’s something quite gratifying about seeing other people being turned away as you tuck into 25 different tasty dishes of chicken, beef, fish and veg, all tastefully arranged in degrees of fiery flavour from left to right (unless you were on the other side of the table that is). We even had room to share two deserts between the four of us . With wine, beer and water the bill came to €157 which allowing for the exchange rate is a lot less than you’d pay in London.

So hunger assuaged we headed off into the night for a rendezvous with the Night Watch who are now back on guard in front of the statue of Amsterdam’s most famous painter at Rembrandtpein.

So do I get the job?

The bronze figures by Russian artists Mikhail Dronov and Alexander Taratynov returned in 2012 from a trip to New York and Russia, hopefully they are now home for good.