One of the aspects of the Pre-Raphaelite exhibition at the Tate Britain that I really enjoyed was the room devoted to the furnishings, stained glass, wallpaper and fabric designs produced by Morris and Co. In particular the four-poster bed with its elaborately embroidered coverlet and hangings reminded me of our visit to Kelmscott Manor, the Morris family summer home in the Gloucestershire countryside. Whether that was from the point of view of the design work or the complicated love lives of those involved I can not be certain.

Kelmscott was built around 1570 with an additional wing tacked on in the 17th century. In 1871 William Morris and his friend Dante Gabriel Rossetti took out the lease on Kelmscott. The Tudor manor house appealed to Morris’ aesthetic principles, it also took his wife Jane’s affair with Rossetti out of London’s public eye. Rossetti wasn’t Jane’s only lover at Kelmscott. The poet and radical Wilfred Scawen Blunt took up with Jane after the painter’s death in 1882. Whether Morris knew about his wife’s affair we will never know for sure, but Blunt recorded in his diary that Jane would leave a pansy in his bedroom as a signal when she wanted him to tiptoe along to her bedroom.

Kelmscott is packed to the rafters with objects created by Morris and his friends, including the afore-mentioned bed with its coverlet embroidered by Jane, furniture, ceramics and books produced by Morris’ other business The Kelmscott Press. (for some reason we have no photography of the interior, it may not have been allowed at the time of our visit).

The gardens with the outhoused laundry room, bakehouse and privy are also worth a visit, as is the nearby St George’s Church.

Dating from the 12th century the Church has some interesting medieval wall paintings, 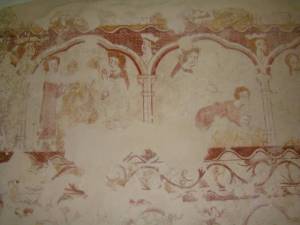 while in the churchyard you will find the final resting place of Morris, Jane and their daughters, Jenny and May. The memorial was designed by Morris’ friend and colleague Philip Webb. 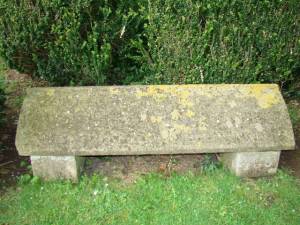 Being able to see the rooms where Morris, Jane and Rossetti worked, relaxed and romanced really brought everything that I had read about their complicated relationships to life. Naturally it was also a treat to see so much of their creative work, and that of Morris’ other colleagues too.

Kelmscott Manor is close to the village of Lechlade in Gloucestershire and the easiest way to get there is to drive. The nearest railway stations are Oxford or Swindon, but they are quite far away and you will need to continue your journey by bus and a taxi. The house is only open on Wednesdays and Saturdays between April and October. tickets for the house and garden cost £9.