As we had adults Saturday night this weekend, we decided to try out the new Indian tapas restaurant Imli, in Soho’s Wardour Street. Arriving in London’s west end a wee bit early we headed off to the Nordic Bar for a quick drink before meeting up with Mr Wolfe in the tequila bar downstairs at Wahaca.

I have often walked past the Nordic Bar in Fitzrovia’s Newman Street (no. 25) and thought “I really must try that place”, but never got around to it before. Situated in a basement, it’s pretty dark inside and the black walls don’t help to brighten the place up. Draft beers are Tuborg and that bloody awful Carlsberg, which isn’t very imaginative since they are both made by the same Danish brewer, but there are beers and ciders from other parts of Scandinavia in bottles as well as a selection of Swedish vodka. Prices are what you’d expect from a London pub so quite a lot cheaper than a real Scandinavian pub!

Next stop was the tequila bar downstairs at Wahaca where we met up with Mr Wolfe and tried the smoky Forever Oax reposado mescal with a Pacifico beer chaser, which went down well with some nachos and guacamole. We had just enough time to savour an old Marguay reposado tequila before legging it across Wardour Street to Imli (167-169) where our table was ready.

There has been a fair bit of noise about this place bringing the concept of tapas to Indian food recently, but Mother India in Edinburgh and Glasgow got there first. Still Imli’s menu is packed full of really tempting stuff. We took the easy option of going for the set menu B at £25.95 (there is a set menu A at £19.95 which is pretty much the same only minus some of the meat dishes). The first stuff to arrive were a grilled spicy chicken salad dressed with honey and ginger, Aloo Matar Tikki Ragda – a potato and pea cake served with a red onion and tamarind chutney and some deep fried spicy squid, all beautifully presented and quite delicious.

The next course to arrive was honey grilled duck on a bed of turmeric mash. although a bit on the small side it was really, really good and I could have eaten much more of it. This was followed by lamb rogon josh, plus a creamy curry of mushroom, baby corn and spinach and a Bombay alloo, accompanied with pulao rice, plain and cheese naans. Again all very nice. Finally a home-made fig and ginger ice cream finished off the meal perfectly. All in the food was very good and as with Mother India the smaller portions ensured that while nobody went hungry there was not any waste.

On the down side the drinks are a bit pricy (large Cobra about £7), there are no little extras like heated towels or even an after dinner mint after the meal and a 12.5% service charge is added to your final bill. I think that’s a bit cheeky given the extortionate price of the booze. On balance though it was a good night out despite the four of us all walking out £45 lighter.

There was only one thing left to do, so cutting down Old Comption Street we just had time for a couple of pints in The Coach and Horses before getting the tube home.

Whenever we travel we always try to cram in as much experience as we can, since our time on this planet is so limited. However one of the drawbacks of cramming so much life in as you get to a certain age, is remembering the finer details. This is one of the reasons for my blog, but catching up with everything I want to write about takes time and stuff has got out of its chronological order. But then I did say Shipscooksstuff was going to be unstructured, so random stuff about Edinburgh and Cyprus will be turning up over the next couple of weeks.

Anyway let’s go back to Edinburgh. Being based at the Haymarket end of the New Town meant that there were a few new places to explore. In Palmerston Place, quite close to our chosen hotel was the rather magnificent Cathedral Church of St Mary the Virgin, which is the see of the Episcopalian Bishop of Edinburgh and the largest ecclesiastical building in Scotland. 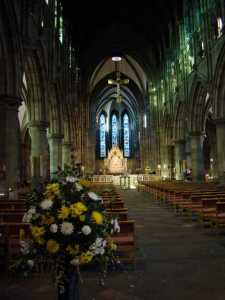 It was designed by Sir George Gilbert Scott, who also designed the Albert Memorial in London, in the Gothic style and construction began in 1874. It was finally finished in 1917 under the watchful eye of his grandson Charles Marriott Oldrid Scott. Another of Scot’s grandchildren, Giles Gilbert Scott, designed the old Post Office telephone box, but that is another story. Aside from the interior’s Neo-Gothic splendour, within I was fascinated by some turn of the century brass memorial plaques that utilised Arts and crafts style typography, but then maybe I have been hanging around with designers for to long.

There is also a memorial to a Captain James Dundas VC of the Royal Engineers, who was killed in action in Afghanistan in 1879, age 37, some things don’t change do they?

I first spied the Indian Cavalry Club from the Edinburgh Airport Bus and have wanted to give it a try for some time. Situated in Coates Crescent in one of the New Town’s  larger Palladian houses, its interior is very much as you would expect a Raj officer’s mess to look, crisp white linen, military portraits and attentive waiters in smart uniforms. I had the paneer pakora (deep-fried Indian cheese, well it is Scotland after all) to start with before choosing my main course. The Cavalry Club menu prices it’s curries by the meat or fish selected and you choose the sauce. I had a methi lamb and it was delicious, as were the dishes selected by my companions and the side dishes. Now Edinburgh has some very good Indian restaurants, but I have to say that I have seldom enjoyed a curry as much as the one I ate here.

What’s the damage?, well not for the faint hearted £170 for the four of us, but that did include starter, main course, aperitifs, beer,  a bottle of wine (£18) and service.  We also joined the restaurant’s Pukka Club which will give us a 10% discount when we next return. 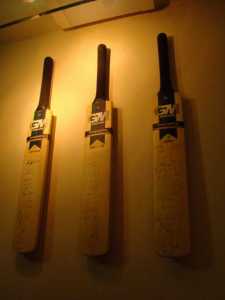 Cricket bats signed by the Indian, Pakistan and Bangladesh teams at the Indian Cavalry Club

One place I won’t be returning to is the Clifton Fish Bar on Clifton Terrace near Haymarket Station. Very bland and greasy small doner, plus soggy chips with thin tasteless curry sauce for £7. Just because people are a bit merry after the pub, it’s no reason to rip people off, avoid at all costs .

With our daughter at the University we spend a lot of time in Edinburgh. I like the city very much, it’s rich in history and the centre is relatively compact and easy to walk around. It has some great pubs and restaurants too.

Our latest trip started with a beer at Greyfriars Bobby’s Bar in Candlemaker Row. 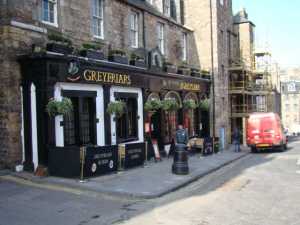 This boozer is named after the faithful little Skye terrier who kept watch over his master’s grave for 14 years, until his own death in 1872. The grave of Bobby’s owner, policeman John Grey is in the yard of Greyfriar’s Kirk nearby. It’s worth a visit if only to say that you have seen the final resting place of Scotland’s (and some would argue the world’s) worst poet William Topaz McGonagall. 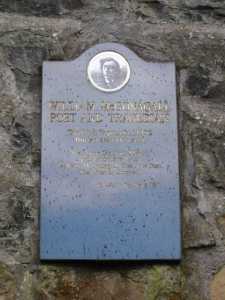 And the cry rang out all round the town,
Good heavens! The Tay Bridge has blown down.

See what I mean.

Bobby himself is imortalised in bronze just in front of the pub and is popular with tourist’s who like to rub him for luck. 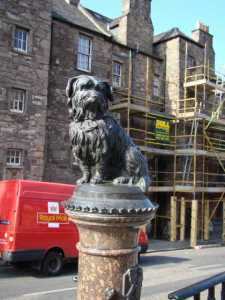 The pub itself is split on two levels thanks to being built on a steep hill and has a good range of beers, lagers and malts. I have always found to to have a nice friendly atmosphere and it does do very good pub grub at lunchtime.

However we had something a bit special to celebrate so our next stop was Mother India’s Cafe (3-5 Infirmary Street, tel 0131 524 9801) . The idea behind Mother India’s is an Indian tapas bar. It’s not as crazy an idea as you might think. The individual dishes come in small portions to the table, just like they would in a Spanish tapas bar, everyone can share and you don’t end up with mountains of uneaten food when everybody is too stuffed to fit a wafer thin mint at the end of the meal. The crab fish cakes and the Archari chicken cooked with pickles are especially good.

What’s the damage? Enough for four, plus beer clocked in at £72.

And with that we wobbled off to our beds.