Last Saturday took us into London’s west end for a bit of shopping and more importantly a slap up feast at Wong Kei in China Town, but first we took a diversion to the old Simpsons of Piccadilly (203-205 Piccadilly) for cocktails on the 5thView cocktail lounge.

View from the Cocktail Lounge at the Waterstones bookshop

The old Simpsons is now a monster huge Waterstone’s Bookshop with the 5th floor converted to a cocktail lounge. the photo above was taken back in 20011, the present view is blighted by a bunch of cranes. To be honest the cocktail lounge seems a bit blighted too, the decor is looking decidedly shabby, despite the website’s claims of refurbishment and the service is slow and unknowledgable. As to the cocktails they are I suppose average priced for London at between £7 and £11, but the snacks (£3 for a tiny bowl of nuts) are a bit of a rip. I had a gin sour, it was nothing special, but the £40 bill for the four of us left me feeling a bit sour too.

Wong Kei (41-43 Wardour Street) is a bit of a Soho legend. It’s one of the largest Chinese restaurants in the UK with seating for 500 guests and a reputation for having some of the rudest waiting staff in the UK. Oddly enough this is one of the things that drags people in and although service is shall we say a little brusque it is quick and efficient as diners are processed as quickly as possible to make way for more customers. Personally I found that most welcome, as there is nothing I hate more than having to hang around for the bill and my change. If you are dining as a couple or a small group, be warned that you may end up sharing a table with other diners, a bit like Chartier in Paris. 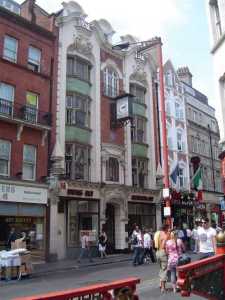 There are some odd things on the menu including deep-fried intestines and chicken with jellyfish, but I went for the vegetarian pancake rolls to start followed by the Sweet and sour chicken with rice. The pancake rolls were delicious, especially with the lethally hot chili and black bean sauce and the chicken was pretty good too. What with a bottle of Pinot Grigio I liked the bill too, when it only came to £58 for the four of us (Cash only no cards).

The building Wong Kei is situated in has an interesting history as it used to belong to theatrical wig maker and costumier Willy Clarkson (1861-1934). You can if you look up to the clock see the words costumier and perruquier on its face. Designed by the architect H M Wakeley, plaques by the restaurant’s door attest to the foundation stone being laid by  Sarah Bernhardt in 1904 and the coping stone by sir Henry Irving the following year. Clarkson occupied the premises until 1940.