At last, I finally get around to writing up the last part of our Italian holiday.

After  brutally early start we eventually arrived on the outskirts of the cathedral city of Salerno. The scenery on the coastal drive from Sorrento had been very pretty, but as we approached the Salerno things were looking a bit grim, lots of quays with stacks of containers and massive ships betrayed the city’s main industry. It got a bit more interesting once we were in the centre and out of the coach. A brief walk through the narrow streets from the sea front, took us to the medieval cathedral or duomo.

The cathedral was founded in 1076 by Robert Guiscard the Norman mercenary who was appointed Duke of Apulia and Calabria by Pope Nicholas II.

From the outside the most striking feature is the 56 metre high,12th century bell tower which was built in the Arabic-Norman style. Inside, the cathedral was restored to something like it’s original medieval condition in the 1930s. Above the altar there is this rather beautiful domed ceiling.

Painted Ceiling above the altar

The duomo is regarded as one of the initial symbols of the Italian Renaissance because it is where Pope Gregory VII, who rejected German domination of the Holy Roman Empire is interred. Another famous burial is claimed for the crypt. Restored by Domenico Fontana in the 17th century this groin vaulted hall is said to be the last resting place of St Matthew.

Keeping St Matthew company is the column that was allegedly used as an executioner’s block when the Roman Emperor Diocletion decided to chop Matthew’s head off!

We carried on to Paestum by the coast road. The long narrow beach here is very popular with local people. In September 1943 this was where the British and American forces landed in Operation Avalanche. For some bizarre reason our guide told us that Ernest Hemingway came ashore with the Americans, but I’m pretty sure that ‘Papa’ was patrolling the Caribbean in his boat, Pilar, searching for U-Boats at the time.

Paestum (admission €6) was founded by Greek settlers in the 7th century BC and is one of the best preserved Greco-Roman sites in Italy. There are three major buildings on the site, generally known as the Temples of Hera and Athena and the Palace of Justice, although the discovery of an altar to the front of the Palace of Justice has shown it to also be a temple. the discovery of early Christian tombs cut into the floor of the Temple of Athena indicates that these buildings were probably converted into churches before the city was abandoned to malarial swamps in the early medieval period. 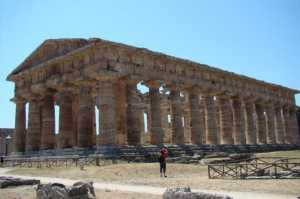 Paestum is a very large site and there are also some remains of later Roman buildings like the Forum and Amphitheatre. 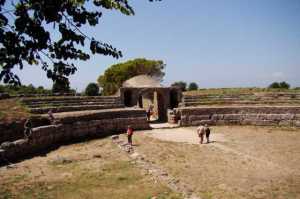 Smaller items from Paestum are in a museum (admission €4) just across the road from the site. aside from pottery and metal items there are some rather lovely tomb paintings like this one of a symposium or drinking party.

Fully cultured out we boarded the bus for our final destination, Caseificio Barlotti, an ice cream parlour on a Buffalo farm.

The water buffalo is believed to have been introduced to the Campania region of Italy by the Normans, who first encountered them in Sicily, where they had been introduced by the Arabs. Buffalo milk is very creamy and is used to make the best Mozzarella cheese. It also makes phenomenally good ice cream definitely worth the €2 we paid for a cornet.

Curiously, despite their similarity to domestic cattle, water buffalo are too genetically different to hybridise with them, unlike the bison which produces a zubron (European bison/cow cross) or a beefalo (American bison/cow cross)

Our trip was booked through Thomson and cost a whopping £32.50 for basically being driven around in a bus with a guide. No admission fees were included and a set lunch of pasta with more rotgut wine was an extra €13.