As anyone who has read my about post will know I am a big fan of horror movies, maybe growing up in the 1960s and 70s when Hammer, Tigon and Amicus film horrors were a regular fixture on late night telly is something to do with this. However there are few post 1975 horrors that I have really enjoyed. I think this is largely because of a shift of focus away from traditional supernatural monsters like vampires, werewolves and ghosts to serial killers, torture porn and the ubiquitous bloody zombies (which technically are not even zombies) and the consequent replacement of that shivering anticipation of something nasty that is about to happen with gratuitously graphic gruesomeness . There are some notable exceptions like the gloriously deranged Dog Soldiers or Reanimator, but I guess I’m kind of an old school horror fan.

So imagine my delight when I came upon Lord of Tears, a new Scottish movie that Lawrie Brewster, the director/producer, claims is influenced by such British classics as The Innocents, The Haunting and The Wicker Man. I’m quite excited about a filmaker with these influences, as I remember The Innocents, with the lovely Deborah Kerr as the governess haunted by the spirit of evil valet Peter Quint through those awful children, as one of the most frightening films that I have ever seen. One of the reasons that The Innocents worked as a scary movie was the haunting cinematography by Freddie Francis and from what I have seen in the trailer Lord of Tears also employs some stunningly brilliant camera work too.

So over to the movie press release: The film tells the chilling story of James Findlay (Euan Douglas), a school teacher plagued by recurring nightmares of a mysterious and unsettling entity. Suspecting that his visions are linked to a dark incident in his past, James returns to his childhood home, a notorious mansion in the Scottish Highlands. There, he finds love in the form of aspiring dancer Evie Turner (Lexy Hulme) who helps him to unravel the dark history of the house. But, when James finally uncovers the disturbing truth behind his dreams, he must fight to survive the brutal consequences of his curiosity… 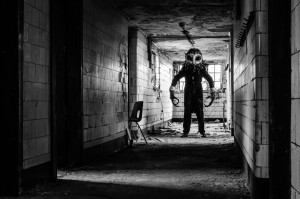 What’s even more encouraging about this movie is that it has been made outside of the traditional studio system and is therefore more of a product of love and enthusiasm than the commercial imperative. The film is shot and edited, but Lawrie is looking for support with the marketing costs through Kickstater, if you want to pledge a few quid you can here.

Certainly the quality of the footage in the trailer looks very impressive and there is a memorable monster in the owl man. I can’t wait to see the whole film when it is released.

4 thoughts on “Lord Of Tears”