While we are in Edinburgh it won’t come as a surprise that we like to try visit a few pubs.

Me at the Captains

On Friday night we went to the Banshee Labyrinth in Niddry Street. This is reputed to be Edinburgh’s most haunted pub. Part of this boozer is the subterranean vaults formerly frequented by Edinburgh’s cut throats and thieves, while the rest was part of a house owned by Lord Nicol Edwards, the richest man in Edinburgh. Inside are seven rooms, including three bars and a cinema, and there is regular free live rock music, which keeps Edinburgh’s Goths and rockers happy. We could only stay for one as we had a table booked at Mother India (see Beer and Curry Tapas for details) but I think the Labyrinth will repay a further visit.

Oddly enough the Labyrinth is the sister pub to one we know fairly well, The Black Rose Tavern on Rose Street. This place is much smaller but has a decent choice of music (Zeppelin, REM, Prodigy etc) and hosts an open mike rock karaoke which can be quite funny. Not much of a choice of beer though, unlike The Black Cat (168 Rose Street) which has some excellent ales, including West’s St Mungo lager, which is brewed to German purity laws in Glasgow of all places. It also has an interesting menu which I think makes a future visit quite likely.

On Saturday afternoon we had a drink in The Captain’s Bar in South College Street. We first discovered this boozer during the Festival last year.

It’s quite an eccentric little pub serving McEwans and Deuchars, that still has many of it’s original working features like these taps on the bar.

It is also home to a vibrant folk music scene and can get quite packed of an evening. Not far from the Captain’s, in Drummond Street we found the Brass Monkey.

Now this really was the discovery of the weekend. It does not look much from the outside, but we were pleasantly surprised to be welcomed by the strains of AC/DC as we entered and settled down with a pint of Red Stripe and a soup with homemade humous roll combo (£3 ). As we supped our ale we could not but help hearing explosions and gunfire over Mr Jimi Hendrix. It turned out that this pub also has it’s own cinema and was showing From Dusk till Dawn, which was just coming to it’s end. So picture over we popped in for a look and found what must be the most comfortable cinema in the UK. 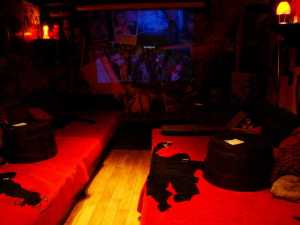 With sofas lining the walls it has all the comforts of home without the washing up!